Topo Chico does the twist
Topo Chico, a sparkling water known for its simplicity, is taking a different twist on the bubbly beverage.
The water, owned by beverage giant Coca-Cola, is introducing Topo Chico Twist of Tangerine. The new product joins Topo Chico’s Twist line that has rolled out other citrus offerings, including Twist of Lime and Twist of Grapefruit. The product is being sold now at Sprouts Farmers Markets before debuting this spring at Whole Foods.
Topo Chico, which Coca-Cola acquired for $220 million in 2017, has been slowly expanding the beverage — even as it moves forward with plans to eliminate an estimated 200 brands globally across its portfolio to focus. Coca-Cola CEO James Quincey has called Topo Chico one of the “rising stars” the company is looking to scale up.

The global sparkling water market size was estimated at $27.59 billion in 2020, according to a report by Grand View Research. The market is expected to grow at a compound annual growth rate of 11.8% from 2020 to 2027, reaching $59.67 billion in sales by 2027.
The segment has seen an influx of competitors in recent years as consumers look to better-for-you options with little or no sugar, and soda makers seek to expand their portfolios to offset declines in their signature beverages. PepsiCo rolled out Bubly and purchased home sparkling water maker SodaStream for $3.2 billion in 2018.
Along with Topo Chico, Coca-Cola introduced a new sparkling water brand called Aha in March 2020, the company’s first major new brand launch since 2006. And beverage competitor Keurig Dr Pepper acquired sparkling water brand Limitless last year.
Several other sparkling water makers have seen sales surge, including Spindrift, which flavors its sparkling water with real squeezed fruit. Top Chico, which has been sourced from Cerro del Topo Chico in northern Mexico since 1895, fits squarely into the category with its mix of sparkling water and fruit juice.
— Christopher Doering

For Tillamook, vintage is in
Tillamook’s latest additions to its collection of cheeses are a blast from the past.
The 110-year-old cheesemaker debuts two new cheeses every year, marking the third and tenth anniversaries of particular cheeses. Next in the lineup: vintage cheeses from 2011 and 2018. The 2011 reserve flavor has “sweet fruity notes of apple, honey and pineapple,” according to Tillamook’s website.The 2018 selection has a “bold, nutty cheddar nose [combined with] flavors of sweet malt and barley, balanced with grassy notes of leek.”
For an established player like Tillamook, playing on its heritage as a local, artisanal label helps it stand out in the dairy aisle, even as consumers turn toward plant-based alternatives. The company prides itself on following the “Tillamook Way,” which emphasizes caring for the land, animals and communities. In fact, Tillamook recently became a certified B Corp, making a commitment to social and environmental performance, transparency and accountability.
Despite being more than a century old, Tillamook has shown itself to be nimble and responsive to trends. Even as the pandemic disrupted supply chains across the food and beverage space, the company’s quick action early on kept its product in grocery dairy cases.
It also has been savvy with promotions. The Tillamook County Creamery Association co-op, which owns the brand, is selling 40-pound “Mother Loaf” blocks of its cheddar cheese in celebration of its 114-year anniversary (or as a timely, memorable gift on Valentine’s Day) through its new direct-to-consumer site.
Tillamook hasn’t yet dipped its toes into the plant-based space, but maybe it doesn’t need to. Sometimes tradition is more than enough to satisfy consumer needs.
— Barbara Smith and Samantha Oller 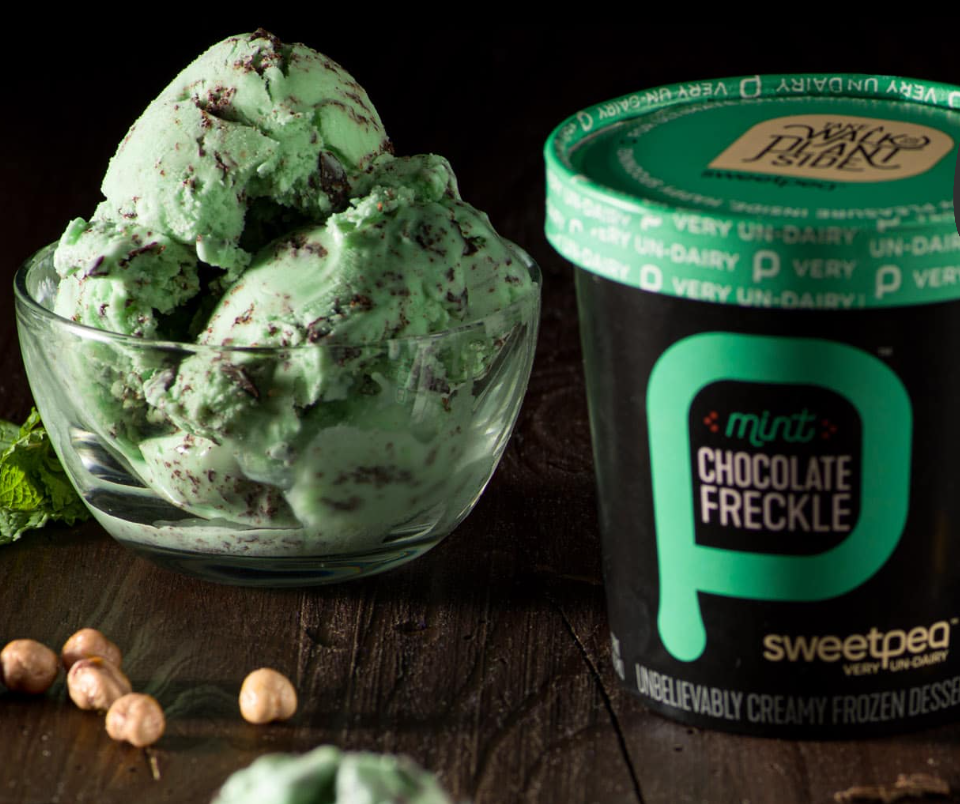 SweetPea puts chickpeas in a cone
Once just a side dish or ingredient in hummus dip, chickpeas are everywhere now.
They’re pasta, pizza, snacks, milk, plant-based meat and rice. And now, they’re ice cream.
SweetPea is a non-dairy creamy frozen dessert created by a family that had been in the frozen treat business, and had a member who was lactose-intolerant. Co-founder Heather Romens said in a press release that she never was able to enjoy those ice cream desserts until now. SweetPea has 10 different flavors sold by the pint: Mango Tango (Feat. Peach), One n’ Only Cookies n’ Cream, Hello Cookie Dough, Peanut Butter Bomb, T.G.I. Pieday Raspberry, Salted Caramel’s Sweet Talkin’ Pralines, That’s a Mean Vanilla Bean, Must Do Cold Brew, Mint Chocolate Freckle and 3 Parts Chocolate.
The non-dairy ice cream space is getting crowded, with a wealth of options that go beyond the fruit sherbet that dominated it a decade ago. According to Mintel statistics reported by The Vegconomist, vegan ice cream sales more than doubled between 2015 and 2020. Global Market Insights estimates the worldwide dairy-free ice cream market will be worth $1 billion in 2026.
But SweetPea isn’t just an offering for people who cannot have dairy. The chickpea-based frozen treat also has fairly robust nutritional credentials. The brand’s website touts the fact that SweetPea has half the fat and calories as traditional ice cream. Chickpeas themselves are a good source of dietary fiber, magnesium, iron, folate and vitamins.
As more consumers become interested in non-dairy ice cream because they want to avoid allergens, eat more climate-friendly treats or they prefer the taste, the looming question is whether they will care about how healthy SweetPea is. While some consumers may just want a creamy non-dairy ice cream, the nutritional aspect is likely to draw some. After all, low-calorie and high-protein Halo Top went from being a small startup to leading pint sales in 2017 because of its its strong health halo. While Halo Top’s sales have fallen from that peak, better-for-you ice cream has remained a powerful force in the freezer section.
— Megan Poinski