It’s worth noting this seasoning blend isn’t necessarily anything new. Seasoning companies have sold their own bottled cinnamon sugar blends for years. According to McCormick, recipes for cinnamon toast date back to the 1600s. Cinnamon and sugar have been blended to make confections for hundreds of years.
The Cinnadust website says the new sweet seasoning has “the taste you love with notes of caramel, vanilla and graham flavor,“ but given the ingredients list — sugar, cinnamon, anti-caking agents, natural flavors and sunflower oil — it’s unclear how different Cinnadust is from the long-existing seasoning blends.
By moving the signature cereal flavoring into a shaker bottle, Cinnamon Toast Crunch becomes less of a breakfast brand and more of an ingredient. And even though the sweet blend that is the cereal’s signature taste has already spread to many products, Cinnadust gives consumers the ability to apply it to any food. It also frees the Cinnamon Toast Crunch flavor from what consumers may see as an overly processed CPG items, and lets consumers put it into home-cooked treats, including cookies or desserts. Or maybe even on actual pieces of toast.
— Megan Poinski

Kellogg gives morning snack bars a jolt
Even as consumers spend more time at home this summer, snack bars and coffee remain popular options for a quick morning pick-me-up. Kellogg has found a new way to combine the two offerings.
The cereal giant is rolling out Special K Caramel Latte Pastry Crisps, loaded with caramel and a hint of espresso. Each two-pastry pack contains as much caffeine as a half cup of coffee and 100 calories per serving, Kellogg said, much less than most caramel lattes from popular coffee chains, which can average 374 calories.
The new offering is a low-calorie, portable option from Kellogg’s Pastry Crisp line, which also has fruit flavors including strawberry and blueberry. The coffee flavor adds a new twist to an old product, potentially opening it up to a broader range of consumers each day. Coca-Cola and PepsiCo took a similar path to innovation when they added coffee to their namesake soda beverages.
“With this innovative indulgence you can enjoy anywhere, you can satisfy your caffeine craving,” Courtney Bentley, brand manager for Special K, said in a statement.
​About 64% of U.S. adults drank coffee each day in 2018, up 2% from the prior year. Together, those caffeine-loving consumers downed about 400 million cups per day. At the same time, while bar consumption has dipped during the pandemic after several years of growth, it is expected to rebound. Large CPGs are no doubt looking for unique and novel ways to capture that growth.
With consumers spending more time at home, and many of them not venturing out to the local coffee shop on their way to the office, while running errands or after dropping their kids off at school, Kellogg may have found a new way to give the bar and coffee categories a lasting buzz.
— Christopher Doering 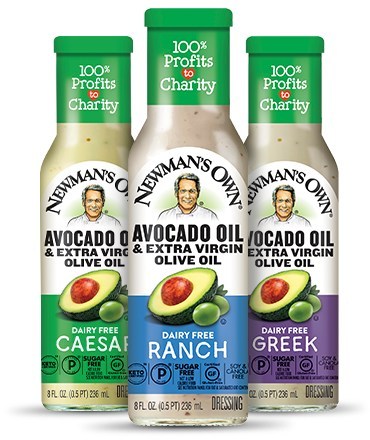 Optional Caption
Courtesy of Newman’s Own

Paul Newman goes dairy-free
Newman’s Own is using avocado oil to convert its classic salad dressings to be dairy-free.
The company announced last week it is launching a new line of salad dressings that come in Ranch, Caesar and Greek varieties made with both avocado oil and extra virgin olive oil as the base. The three varieties are dairy-free, sugar-free, gluten-free, soy-free and canola-free, as well as Keto and Paleo Certified. They maintain a creamy texture, according to a company release. The dairy-free dressings are now available at select retailers in New England.
The company said in a release these new dressings meet increased consumer demand for clean ingredients. Reformulating products and overhauling ingredient lists has become more common as consumers seek out recognizable ingredients and better-for-you products.
In recent years, food manufacturers are using more healthy oils to play up a more nutritional health profile and to diversify their flavor qualities. Coconut, almond, avocado and sunflower oils have become especially trendy, so this new avocado oil-based dressing could draw in consumers.
Newman’s Own is one of many brands selling dressings without dairy. Primal Kitchen, Daiya and Follow Your Heart also offer dairy-free salad dressings. However, the fact that Newman’s Own is a nearly 40-year-old brand that also offers traditional dairy dressings could convince some more mainstream consumers to give it a try. Newman’s Own doesn’t innovate with new lines of products very often, so these products will already stand out on shelves to the brand’s more loyal customers.
Newman’s Own also donates 100% of its profits to charity, which could attract consumers who increasingly place more value in food companies’ social and ethical behavior.
—​ Lillianna Byington

Leftovers: Topo Chico twists on the tangerine; Tillamook shows vintage cheese is in