Jammu and Kashmir weather news: Incessant rain pounded Jammu and Kashmir since Monday causing landslides and flash floods. According to the India Meteorological Department’s (IMD) weather forecast, there will be no immediate relief. The IMD on Wednesday said “intense rainfall activity” is expected over several parts of north India for the next four days. Jammu and Kashmir, Uttarakhand, Himachal Pradesh, eastern Uttar Pradesh, eastern Rajasthan, Punjab, Haryana and Delhi are expected to get more rain till the weekend.

In Jammu, most rivers including the Tawi and its tributaries are in spate due to continuous rainfall.

In Jammu and Kashmir, 15 people were rescued on Wednesday after they were caught in flash floods in Ujh river in Kathua district, the police said. Timely action saved lives of many, including women and children, who were trapped in temporary shelters near the river in Rajbagh area, news agency Press Trust of India quoted a police official as saying. The district administration in Rajouri has asked people living in the low-lying areas and along the rivers, to be alert.

The district administration has asked people living in the low-lying areas and along rivers, to be on alert. pic.twitter.com/FzMZwaCVWx

Most parts of Jammu region have been battered by heavy rain since Tuesday leading to inundation of low-lying areas. Flood water entered homes of many people. 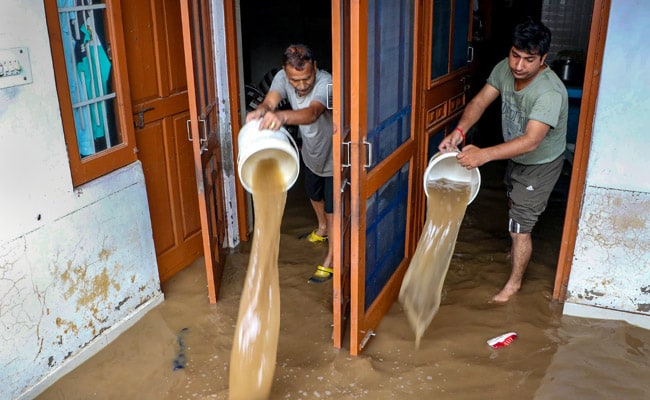 Jammu: People throw out flood waters from their house after heavy rain on Wednesday

The Indian Air Force, in a swift action, rescued a civilian who was stranded on a marooned island in Rajouri yesterday, a defence spokesman said. “A message was received in the evening about an individual stranded on a marooned island south of Naushera. An IAF helicopter, captained by Squadron Leader Ganesh Prasad Honakuppe, was immediately pressed into service to rescue him,” the spokesman said.