Home CIty Lost & found (A pair of rings after 30 years, a chain...
Facebook
Twitter
Pinterest
WhatsApp
The special cell has restored over 13,000 valuables worth over Rs 10 cr to their owners in the past 14 months.

Vaibhav Gawad, 38, had forgotten all about his gold chain snatched while he was boarding a train at Andheri station in the morning rush hour on September 27, 2000. So, he thought it was a prank when a Government Railway Police (GRP) officer called to say he could collect the chain from GRP’s Andheri office. “I was an 18-year-old hotel management student then. Today, I work with a top five-star hotel, am married and have daughter who is three. As far as surprises go, this is right there at the top,” he said.

Pramod Atmaram Borkar remembers he was carrying his daughter in his arms, just five then, when her ear-rings were snatched at the Dadar station. He does not remember the date, but is pretty sure the month was January and the year 1989. Though the experience was traumatic, time had erased all memory of it. So, on Sunday when a GRP constable arrived at their Vasai house (Borkar now lives with his daughter) to restore the ear-rings to them, it was difficult for him to believe it was not a hoax. “It felt like a dream. I think it is a sign from the heavens that the bad times will end soon,” Borkar said.

In all the gloom and doom of coronavirus and the daily death count, a special cell of GRP is spreading some much-needed cheer. In just the past 14 months the team has returned 13,000 valuables recovered from chain snatchers, petty thieves and gangs of robbers to their owners.

Vaibhav Gawad’s chain was snatched at Andheri station in 2000. His wife at the GRP office on Sunday

And while it sounds simple, it is not. For one, some of these thefts had taken place years ago. Two, a lot of recovered material was caught in intractable court proceedings. And three, the owners of these articles had moved residences multiple times and some had even moved to other cities.

But none of this deterred the special cell as it went about not only tracking the owners of these valuables, but also organising lawyers for them when legal complications cropped up. When the special cell was set up, it had 17,000 unclaimed articles in its possession, now they have a little over 4,000 left.

The cell, set up by GRP commissioner Ravindra Sengaonkar, soon after he took over in May 2019, took advantage of the lockdown when, with the train services suspended, the GRP’s work shrank dramatically. “There were no trains running and, obviously, there were no criminal activities in our jurisdiction. So, we focused on this job. According our estimates, we have restored valuables worth Rs 10 crore so far to their owners,” said Sengaonkar.

If all goes according to plan, Mumbai GRP, according to Sengaonkar, will be able to return valuables related to all solved cases before March 31 next year. “Meanwhile, I am trying to create a culture in GRP Mumbai where the focus is on returning the valuable immediately after closure of the cases,” he said. 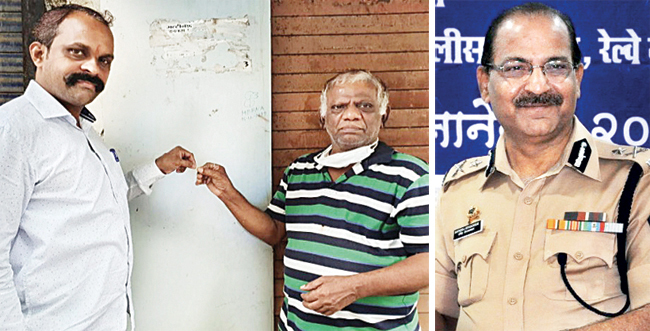 Saraswathi Vaidyanathan Iyer, 65, a resident of Vile Parle, lost her jewellery in a theft in October 2000 on a local train while she was on her way to Mumbai Central to board a train for Jaipur. On Sunday, her daughter Vidya Nair collected the jewellery on her behalf from GRP’s Andheri office.

Iyer says that her last interaction with any railway officer in connection with her lost jewellery was when she was called to the Mumbai Central Railway court in 2007 to identify the jewellery. In March this year, when Iyer was visiting Bangalore, one of Mumbai neighbours called her to say a GRP officer had visited her house to handover the stolen jewellery. “I have been in Bangalore since February. Due to lockdown I could not come down to Mumbai. So, they allowed my daughter to collect the jewellery,” she said, adding that she will forever be indebted to the GRP for “pulling off this miracle.”

Sengaonkar said all these valuables lying with the GRP are dead assets. “In such difficult timed, it becomes so much important for us to restore them to their owners so that they can be of some productive use,” he said. 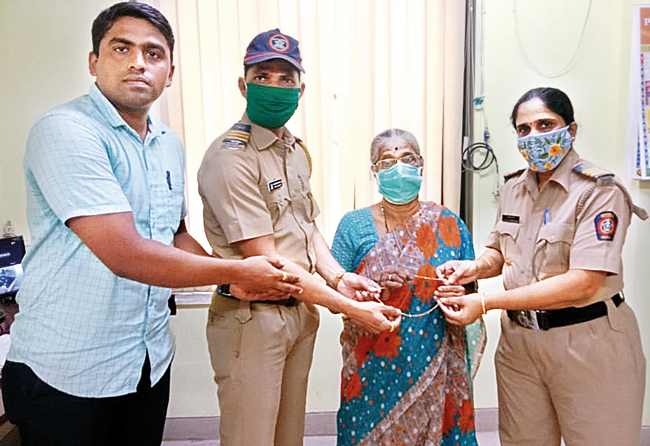 Even as this story was being written on Tuesday, the GRP were returning a 9 gm gold chain to its owner, 80-year-old Khar resident Renuka Hemraj Sonsaure. The chain was snatched while Sonsaure was boarding a train at Vile Parle station in 2012.

Sonsaure, a domestic help, lives alone and has not been able to work for the past few days because if ill health. “I have rented a part of my house to earn some money. This chain could not have come back to me at a more appropriate time,” she said.

Ringing in after 15 years

Rajeshri Salge, a resident of Jogeshwari, was left delighted after the GRP returned her gold ring after 15 years. The woman thanked the police extensively for bringing the item of value back to her.

She wrote, “At around 5 pm, the headmistress of our Nandadeep Vidyalaya called and told me that the railway police wanted to talk to me. I was so scared — what would the police want to say to me?” Upon arriving at the police station, Salge realised that she was not in trouble. “I got my belongings after 16 long years. Financial or emotional value was not important to me over this moment. I was amazed that it was returned after the senior railway police officers struggled to get it… If the masters of every system take such ‘mind’,” she added.

Pinky D’Cunha had a surprise visitor when Ganesh Chaturthi celebrations began. Police Naik Milind Patil from the Government Railway Police (GRP) had knocked on her door to hand over a gold chain. Now this might seem like nothing special under normal circumstances, but that’s not the case. The gold chain was stolen from D’Cunha in February 1994.

While the chain back then cost her Rs 4,500 back then, now it is valued at nearly Rs 33,500. But for D’Cunha, it’s the emotional value that’s left her moved.

The GRP recently recovered a man’s wallet, which the latter lost 14 years ago while travelling on a Mumbai local. Hemant Padalkar, now 42, lost his wallet, containing Rs 900, including a Rs 500 note, on a CSMT-Panvel local in 2006. But not all of the notes were still legal tender.

Padalkar said, “When I realised that my wallet had been stolen, I got down and filed a complaint with the Vashi GRP.” He further added, “I followed this issue aggressively, but after a few months I forgot about it. In April, when I got a call from the Vashi GRP, I was really surprised,” he said.

“We are trying our best to change these notes, but are yet to receive a reply from the authorities,” a Vashi GRP officer said.

‘The GRP pulled off a miracle’

Once a Mumbai resident, now in Bengaluru — Saraswati Vidyanathan Ayyar had an unexpected visitor. The 65-year-old was reunited with her gold chain, a pair of earrings, and a gold bracelet. This comes 20 years after they were stolen while Ayyar was travelling in a Mumbai local. She said, “We had given up hope of any such recovery but the GRP pulled off a miracle of sorts by surprising us with this return.”

Sonsaure’s chain was snatched in 2012

On August 25, 2020, the GRP returned a 9 gm gold chain to its owner, 80-year-old Khar resident Renuka Hemraj Sonsaure. The chain was snatched while Sonsaure was boarding a train at Vile Parle station in 2012. Sonsaure, a domestic help, lives alone and has not been able to work for the past few days because of ill health. “I have rented a part of my house to earn some money. This chain could not have come back to me at a more appropriate time,” she said.

About 20 years later, Vaibhav Gawand was left delighted after the Andheri Railway Police returned the latter’s gold valuables. The GRP has been ardently following up on cases, ensuring that valuable goods would be returned to their rightful owners.

Pramod Atmaram Borkar is grateful to the Mumbai Central GRP for returning his daughter’s gold ring after 30 years. On January 10, 1989, Borkar was boarding a train with his daughter from Dadar’s platform number 3 when miscreants took advantage of the crowd and stole the ring. But to his surprise, the GRP, in January 2020, handed over to him. Borkar said that he had lost all hope but was amazed when the GRP returned the ring after 30 years.

From Mumbai to Bengaluru….

On April 16, 2008, a resident of Goregaon, Shailaja Ramrao Haachandi, was boarding a train from Matunga Road railway station when miscreants snatched her 10 grams gold chain and 26 grams mani mangalsutra. A complaint was registered with the Mumbai Central GRP and the officials had also caught hold of the robbers in December 2008. However, the GRP couldn’t reach out to Shailaja, to return the jewellery, as she had moved to Bengaluru with her family. After years of efforts, finally, the GRP was apprised of her location in the city and after informing her about her belongings, on August 8, 2020, the officials handed them over to her relatives in Mumbai.

The Thane railway police recently returned 20 grams of gold to the owner which was stolen 10 years ago. Amrrutsinh Rajwat Singh had lost the gold in the year 2011, following which he registered a complaint. The railway police searched the accused and recovered the gold. However, since Singh had changed his address, the cops searched for him in Mumbai, Thane and Pune. After looking for his address for years, his valuables were finally handed over to him in Pune.