Tom Holland has been quietly dating someone new…and in the industry. The Daily Mail reported on May 28, citing multiple sources, that the Spider-Man actor has been secretly seeing The Spanish Princess actress Nadia Parkes for more than three months and that they’re quarantining together now. Neither Holland nor Parkes confirmed these reports initially. Parkes made her Instagram private as the news came out. Later, she quietly switched it back to public.But on July 27, Holland made their romance public: He went Instagram official with Parkes, sharing a photo of her out on his Instagram. It’s a rare move for him: Holland has preferred to keep his personal life private.So who is Parkes and how did her and Holland’s romance happen? Here’s what to know about the young actress.

Parkes is a London-based actress who has had roles in The Spanish Princess and Doctor Who.The actress got her first big break on The Spanish Princess shortly after finishing LAMDA drama school in London in spring 2018. She said she left school early to begin filming the project, which started principal photography on May 15, 2018.Parkes played Rosa, one of Princess Catherine’s ladies-in-waiting. She also appeared on an episode of Doctor Who that aired in February 2020. “Honestly, it was like—I was obsessed with it [Doctor Who] when I was 12 years old,” Parkes told model Grace McGovern on her podcast What They Don’t Tell You About in November 2019. “It was literally a young me’s dream.”
This content is imported from Twitter. You may be able to find the same content in another format, or you may be able to find more information, at their web site.

Parkes and Holland reportedly quarantined together early in their relationship and became official shortly after. A source told the Daily Mail in May 2020 that Parkes has been staying with Holland, his brother, and a friend at their London flat. “It was early days for Tom and Nadia when the lockdown was announced in London,” the source said. “They made the decision to isolate together, and things have been going great between them. Tom has told friends and family they’re in an official relationship and living together so soon into their romance has only made them stronger.”Holland didn’t commented on the rumors that he and Parkes are dating. Parkes made her Instagram private when news initially came out and released no public statement. She has since made her Instagram public again.Holland has traditionally kept his relationships private. He told ELLE in July 2019 that he was single then but is “definitely a relationship person. I’m not the fleeting type at all; it’s not my way of life.” Holland has previously been linked to Zendaya and childhood friend Olivia Bolton. Zendaya and Holland, Spider-Man co-stars, maintained they were only friends despite reports otherwise.Holland and Parkes went Instagram official in July 2020.Holland shared a photo of Parkes masked and out on his Instagram, sans caption. He didn’t tag her:
This content is imported from Instagram. You may be able to find the same content in another format, or you may be able to find more information, at their web site.

At the same time, Parkes shared photos of herself out in the same outfit—pictures that Holland presumably took. Her friend Sophie Turner—who just welcomed her first child with Joe Jonas days ago—commented “Fittttttyyyyyyyyyyy” on it. Parkes commented a blowing kiss emoji back to her.
This content is imported from Instagram. You may be able to find the same content in another format, or you may be able to find more information, at their web site.

Parkes has worked at a special needs school while auditioning for roles.Parkes told McGovern in November that one of the misconceptions people have about acting is once you get your big break, it’s easy to book roles. “I did this amazing series [The Spanish Princess],” Parkes said. “I was in drama school when I got the job. I left early to do it. Everyone was like, ‘Oh my gosh, this is incredible.’ I sat there going, ‘Oh my god, this has all happened for me so quickly, and I didn’t even have to kind of deal with all the worry and the rejection. No, it’s not going to be long until I get my next job.’ Ten months later, I hadn’t worked, and I’d started working at a special needs school to help out with some kids there. I was feeling so low.”She said she auditions weekly for parts. “It’s so up and down [the acting industry], but the ups are so worth every second of the downs,” she said. “I’m really, really lucky: I have an incredible agent and the job that I did means I get into auditioning rooms that people have worked you know, five years or seven years to be able to get into those rooms. I audition pretty much once or twice a week, including or sometimes not including self-tapes.””So I have been going up for incredible roles—but up against people that have been in the industry for much longer than me and who have worked a lot more than me and I’ve often missed out on roles because of profile [having more credits and roles],” she continued. “So it’s a difficult one…If you don’t give me the experience, how am I going to get it?” 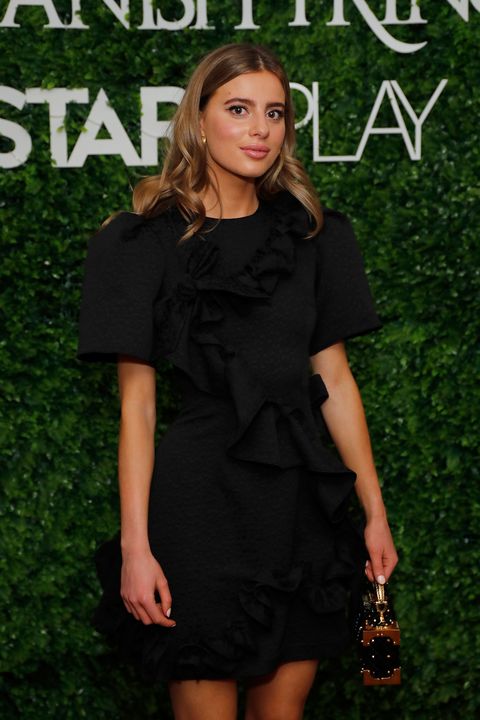 She also opened up to McGovern about coping with rejection. “It’s so difficult not to take the rejection as personally,” she said. “[But] what you have to think is that these casting directors are in a sweet shop of amazing actors. So if you’re in the room and you’re being called in, you’re already good enough for the role.””They’re choosing between all the best sweets,” she continued. “I say this as if I believe it, but every time I manage to make it personal and think, ‘I’m not good enough. Why am I doing this?’ But you do have to remind yourself that they are in an abundance of talent and so you are good enough. Your eye color might not have been right or your height was wrong. Your energy was a different—what you offered was completely different but not wrong but just a completely different way to the way they saw, the writer saw that character when he wrote it.”Parkes is friends with Sophie Turner….who may have introduced her to Holland.Parkes was part of Turner’s group of friends who attended her big bachelorette trip last June to Spain ahead of Turner’s French wedding to Joe Jonas.
This content is imported from Twitter. You may be able to find the same content in another format, or you may be able to find more information, at their web site.

Parkes even posted about the trip on her then-public Instagram: 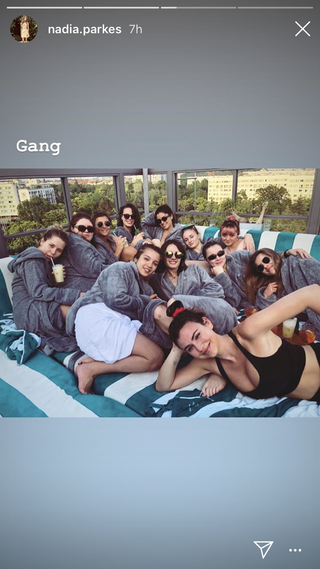 The Daily Mail reports that it is “believed” that Turner and Jonas introduced Holland to Parkes last year.

Alyssa Bailey
News and Strategy Editor
Alyssa Bailey is the news and strategy editor at ELLE.com, where she oversees coverage of celebrities and royals (particularly Meghan Markle and Kate Middleton).