Kanye West has been reported by multiple outlets to be experiencing a major manic episode over the last couple weeks. Last night, the rapper went on a Twitter rant about his wife Kim Kardashian trying to intervene and get him help following his South Carolina campaign rally on Sunday. He asserting on Twitter that she and her mother Kris Jenner were trying to “lock [him] up,” and that really upset and devastated Kardashian, Entertainment Tonight is now reporting.For context, during the S.C. rally, West told the audience that Kardashian and West had discussed terminating her first pregnancy (a private matter that Kardashian was reportedly very upset and shocked he publicly disclosed) and that Harriet Tubman “never actually freed the slaves, she just had them work for other white people.” On Twitter last night, West posted a series of tweets, many of which have been deleted now. He brought up Kardashian’s infamous sex tape and her posing on the cover of Playboy in 2007, suggesting Kris Jenner made her do it.”I put my life on the line for my children that North’s mother would never sell her sex rape [sic]. I put my life on God that Norths mother would never photograph her doing playboy and that’s on God I’m at the ranch … come and get me.”He added in another tweet, “Kim was trying to fly to Wyoming with a doctor to lock me up like on the movie ‘Get Out’ because I cried about saving my daughters life yesterday.”He also tweeted that he wants the family to abandon their Los Angeles home, where they shoot their E! series Keeping Up With the Kardashians and move to Wyoming, where his ranch is. “I love my wife. My family must live next to me. It’s not up to E or NBC anymore.” 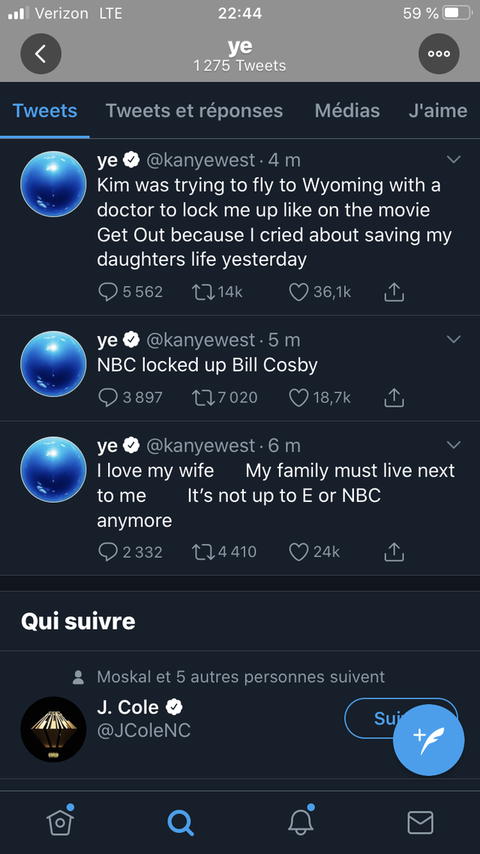 Entertainment Tonight spoke to a source about how Kardashian is feeling about this. The source said that Kardashian “has been trying to get Kanye help for his recent episode but he’s refused it.””Kim is completely devastated right now,” the source continued. The source noted that Kardashian has made a point to keep West’s mental illness private. “Kim has always been public about everything in her life, but with Kanye and him being bipolar she has always respected to keep that more private and within the family,” the source said.”Kanye tweeting about the family and painting her as trying to ‘lock him up’ has upset Kim because that wasn’t her intention and she only ever wants the best for her husband,” the source added.West has talked about being diagnosed with bipolar disorder before and has admitted to refusing to take his medication at times. Yesterday, a source told Entertainment Tonight that the family is worried about him. “Kanye isn’t in a good place and isn’t listening to anyone trying to talk him into getting help,” the source said.

Alyssa Bailey
News and Strategy Editor
Alyssa Bailey is the news and strategy editor at ELLE.com, where she oversees coverage of celebrities and royals (particularly Meghan Markle and Kate Middleton).