Megan Fox has started a new chapter in her dating life. Months after separating from her husband of more than a decade Brian Austin Green, the actress has found new love with musician/actor Machine Gun Kelly (real name: Colson Baker). After meeting on a movie set earlier this year, the pair has been spotted on several dates and even co-starred in a music video together. Below, a breakdown of Fox and Kelly’s early days as a couple. March 2020Fox, 34, and Kelly, 30, met earlier this year on the set of the upcoming indie thriller Midnight In The Switchgrass. Deadline reported that the film’s production in Puerto Rico shut down after two weeks due to the coronavirus pandemic. A source told E! News that the co-stars had “been hanging out a lot since their movie was shutdown,” adding, “The down time has been good for them…They are intrigued by each other and having a lot of fun.” May 15, 2020Rumors of romance between Kelly and Fox began when the DailyMail published photos of the pair grabbing takeout together in Calabasas. The outing came amid rumors that she was quarantining separately from her longtime husband, Green. Both had been spotted without their wedding rings in recent months.The next day, Green posted a cryptic message to Instagram, marking his wife’s birthday. “Eventually butterflies get bored sitting on a flower for too long,” he wrote alongside a photo of a butterfly on a flower. “They start feeling smothered. It’s a great big world and they want to experience it.” May 18, 2020Three days later, the Beverly Hills 90210 alum confirmed that he and Fox have been on a break since December 2019, via his …with Brian Austin Green podcast. “She said, ‘I realized when I was out of the country working alone that I feel more like myself and I liked myself better during that experience and I think that might be something worth trying for me,'” he recalled Fox telling him. “I was shocked and I was upset about it, but I can’t be upset at her because she didn’t ask to feel that way. It wasn’t a choice she made, that’s the way she honestly felt.”He also addressed recent photos of Fox and Kelly out together. “I’ve never met him, but Megan and I have talked about him,” Austin said. “They’re friends at this point, and from what she’s expressed, he’s a really nice, genuine guy, and I trust her judgment.”

Green and Fox share three sons, Noah, 7; Bodhi, 6; and Journey, 3. The former couple began dating in 2004 and split in 2006 before getting married in 2010. They filed for divorce in 2015, but reconciled ahead of their third son’s birth in 2016. “I will always love her, and I know she will always love me, and I know as far as a family, what we built is really cool and really special,” Brian explained, later adding, “I really don’t want Megan and I to be at odds. She’s been my best friend for 15 years, and I don’t want to lose that.” 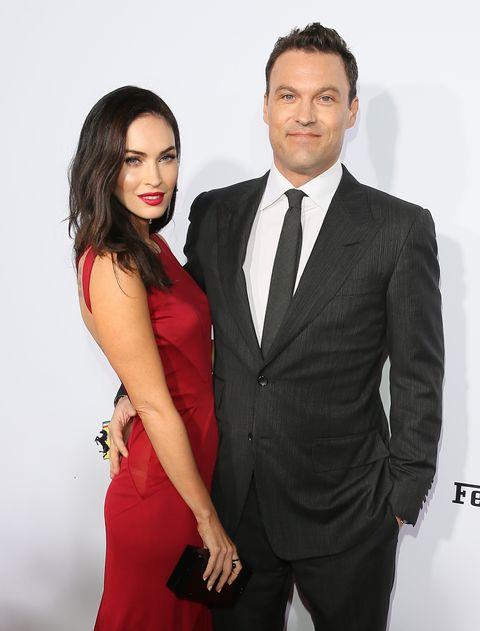 A source from Fox’s camp spoke to E! about her relationship with Kelly. “Megan has been working on a movie with Machine Gun Kelly and gotten close to him. They are hooking up and have been for a little while,” the insider said. “She is separated from Brian Austin Green, and they are taking time apart as a couple. She has something going on with Machine Gun Kelly that she is excited about.” May 20, 2020 Then, Kelly released the music video for “Bloody Valentine,” the first single off of his upcoming album. Fox starred in the video as Kelly’s domineering girlfriend, sharing an almost-kiss with the musician and stoking further speculation about their relationship.
This content is imported from YouTube. You may be able to find the same content in another format, or you may be able to find more information, at their web site.

June 15, 2020Nearly a month later, the Daily Mail published photographs of Fox and Austin holding hands and kissing after a night spent at Mr. Furley’s Bar in Sherman Oaks, California. The couple’s public date night came one day after Green was seen having lunch at a Mexican restaurant in Los Angeles with model Courtney Stodden by TMZ. Later that day, Kelly seemed to allude to his new relationship, tweeting a lyric from “Bloody Valentine.” “I’m calling you girlfriend, what the f*ck.’ Life imitated art on that one,” he wrote.
This content is imported from Twitter. You may be able to find the same content in another format, or you may be able to find more information, at their web site.

June 16, 2020A source told E! that although Fox may be moving on, Green “isn’t filing for divorce yet,” adding, “He wants to give Megan space and is hopeful they will find their way back to one another. It’s been hard to see her get back out in the dating world, but he is trying to fill his time with his kids and friends.” June 17, 2020The next day, Us Weekly reported that Kelly and Fox were officially dating. “Megan and MGK have gotten more serious and are officially dating and referring to one another as boyfriend and girlfriend,” a source told the outlet. “They’re enjoying spending more and more time together and have a strong connection.” This isn’t the first high-profile romance for either party. Fox previously dated Transformers co-star Shia LaBeouf before marrying Green. Kelly has previously been linked to a string of celebrities, including Halsey, Amber Rose, Kate Beckinsale, and Noah Cyrus. In February, he denied rumors that he was seeing Demi Lovato, tweeting, “Stop thinking I’m dating someone just because I’m in a picture with them.”

A source told E! News that this relationship is “new and exciting for Megan” and that she’s spending time with Kelly whenever Brian has the kids. The insider continued, “She has only been with Brian for many years, and this is very different. She’s into it.” June 23, 2020 More than a month after their first public outing, Fox and Kelly appear to be going strong. The Daily Mail ran photographs of the couple leaving dinner at Soho House in West Hollywood, on Tuesday, June 23. Earlier that day, Kelly shared photos of his and Fox’s matching “Bloody Valentine”-inspired manicures on his Instagram Story, via Us Weekly.
July 17, 2020the couple was seen at Los Angeles International Airport and spotted sharing a kiss, which The Sun captured in these photos.

Hilary Weaver
Hilary Weaver is a freelance writer based in New York who writes about politics, queer issues, Meryl Streep, Glenn Close, and every woman the Queen has ever made a dame.