Clueless is officially 25 years old. Though it’s hard to process that milestone, the cult favorite has adapted with each passing year, finding its way onto streaming sites and into social media conversations and countless homages, from celeb Halloween costumes to the recent Baby-Sitters Club reboot. Now available on Netflix, Clueless—starring Alicia Silverstone and quotable one-liners like “I’m totally buggin’!” and “As if!”—has reached legend status, immortalizing Cher, Dionne (Stacey Dash), and the kids of Beverly Hills in the annals of film iconography. Two and a half decades later, the fashion still reigns supreme. Polish costume designer Mona May is the mastermind behind Cher’s red Alaïa dress, plaid suits, and 60 (!!) costume changes. “So many of the outfits are still so wearable,” May tells ELLE.com over the phone. “You could go to Saks and Neiman and it’s all still there.” What’s more impressive is May’s influence on TikTok. Scroll through the video-sharing app and you’ll find Gen Z dancing and lip-syncing in sheer tops, A-line skirts, and plaid prints, unknowingly emulating the style May created on the set of Clueless 25 years ago.

“In a way, it is surprising that something can last that long,” May adds. “It’s like, wow, 25 years in fashion? Tomorrow it’s so last year. But then on the other hand, [it’s] always my goal to bring something timeless and feminine to the screen.”Ahead, May talks 25 years of Clueless, the film’s most iconic looks, and what she thinks of that rumored reboot. Clueless is now streaming on Netflix, introducing the film to a whole new audience. What’s it like being a part of something so enduring?I meet so many women, and when they find out I’m the designer, they just squeal with delight. “Oh my God, this was my favorite movie and I got the stockings and my daddy bought me the Jeep.” The personal stories, and how emotionally connected they are and what it means to them, are truly incredible. During your research for the film, you observed real-life students in L.A. The style was very grunge at the time. Why did you deviate from that?That was director Amy Heckerling. [The high-fashion style] was written in the film. I met Amy on another project and [we] fell in love with each other. She was like, “I want you to do this movie because it’s all about fashion and you were trained in fashion. You’re European, so you’re going to bring that flavor. We need to come up with something that’s complete innovation. How can we set trends that are not on the street yet?” 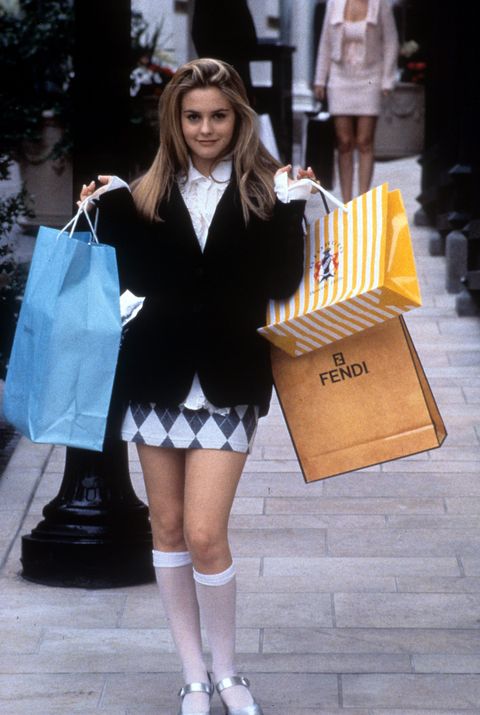 At the time, did you realize the costuming could become such a landmark moment in American fashion?No way. That was my first big movie, but it was a small picture. We had a bunch of new actors. Alicia Silverstone, the most beautiful little angel, was just in a music video. [We had a] great director. The most creative and talented DP [director of photography] created the way that camera looked at fashion, too. How he looked at fashion, we looked at fashion. That was very different. Usually in movies, you’d have close ups, further away shots, but he went with the camera. He looked at the fuzzy pen and her shoe and we saw the backpack, we saw the hat.Sixty costume changes for Alicia Silverstone alone. I think Stacey had almost as many because she was in pretty much every scene with Alicia. I had to dress every extra that came in the morning at 5 a.m. They [would come to set] wearing grunge and they couldn’t [wear it in the film] because they were in a different world [from what] we were creating. We created all the different fractions, the hippies and the stoners and the cool crowd. 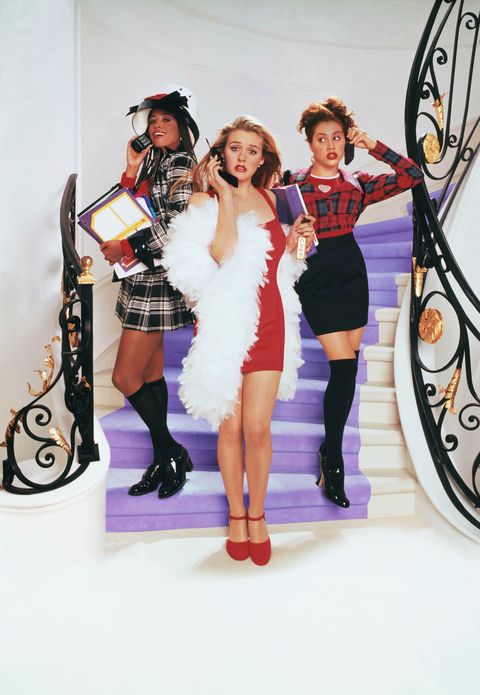 Did you collaborate with any of the actors?Absolutely. The most fun part is when we’re in fittings. It was very important the girls felt authentic. Even though Cher was a snooty rich girl, she still felt real. I think that’s part of the success of this film. People wanted to be the girls and wanted to emulate them. That’s the kind of authenticity you find in the fitting, collaborating with the actors. Alicia understood what fashion meant for this character, how important it was, that she’s the queen. At the time, she was so young, already an activist and an animal lover, and that was much more important to her. [This style] was almost going out of her comfort zone.Stacey has such a great sense of style and she already knew [what she wanted]. She was a little older than Alicia. She’s a little bit more sassy, so we were definitely having fun with her, where we could make the skirt shorter or we could give her more textures—vinyl, leopard, fur. With her skin tone she was able to wear all the neon colors. Cher was much more classic: the empire dresses, the cap sleeves, the coats, the sweater sets with the A-line skirts. She really was kind of like the princess, quintessential Beverly Hills daddy’s girl. 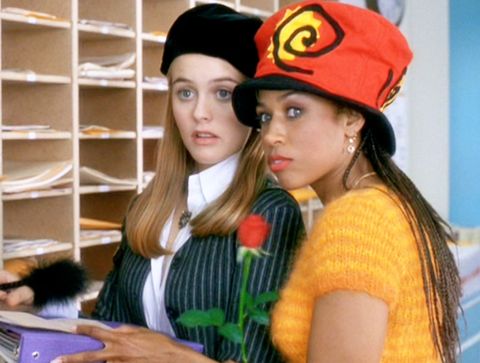 To this day, people are still talking about Cher’s amazing closet. How did that come about? It actually was [mine] and Amy Heckerling’s idea. We were always pushing boundaries, discussing, “What would this girl have as this rich, have-everything girl? A movable closet!” Computers were just coming up, so she has to have this mix-and-match computer program for her clothes. It was revolutionary at the time.
This content is imported from YouTube. You may be able to find the same content in another format, or you may be able to find more information, at their web site.

What was one thing you knew Cher and Dionne would never wear?Spandex. It’s so ’80s. They probably wouldn’t wear jeans. At the time, there was no mixture of high and low [fashion]. I didn’t have a lot of money to work with. I wanted to do the high-end looks and the runway stuff, but I had to be innovative. I couldn’t call Balenciaga or Dolce and say, “Hey, can you just send me this stuff?” They didn’t have the PR machine. I didn’t have big stars. I had to really be innovative—I got the Dolce & Gabbana suit and I found that really cool purse for Dionne at the thrift store. Everybody talks about the girls’s fashion in the movie, but what about the boys: Travis, Murray, and Christian? Christian was my favorite. When we met the actor [Justin Walker], he was like James Dean. That completely informed my idea for his look. I did all the vintage clothing on him: vintage pants with pleats, but I mixed it with this tight sexy T-shirt, and of course a hat. 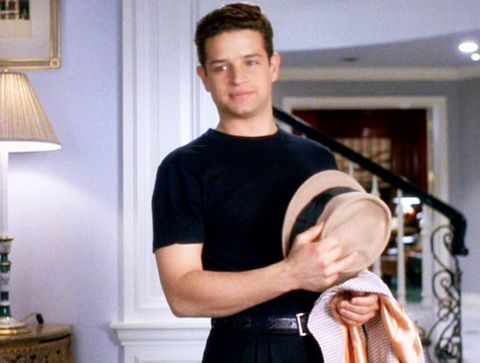 Travis, with his funky skate clothes, but again, not as grungy—everything was elevated. Murray with his hipster hip-hop look, but again, very high-fashion. Matchy-matchy hat, color palette, head-to-toe one color, the Kangol hats. Always matching with Dionne in some way. What was it like styling Paul Rudd against Cher?Well, he read Nietzsche. He was the smart boy, he was in college, and we wanted to keep him very simple, very realistic. That’s what guys wear on college campuses now: jeans, t-shirts, plaid shirts. I think I used a breast cancer awareness T-shirt in one of the scenes. We tried to give him a bit of messaging, but we needed to keep him very grounded. 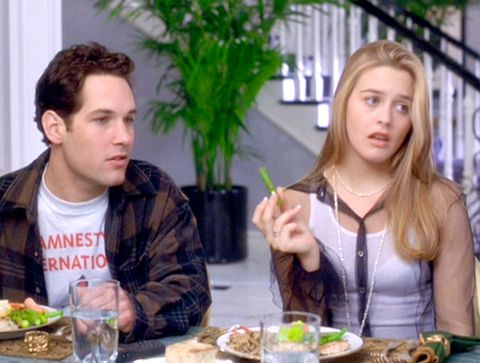 How did you land on Cher and Dionne’s iconic first day of school outfits?Amy was a huge fan of classic plaids, the Catholic school look. It’s timeless. We wanted to do a high-fashion take on that. The yellow suit is Dolce & Gabbana, off the rack. I spent the money. We tried so many different things for the yellow suit. We tried red, we tried blue, and then she put the yellow suit on and she became like a ray of sunshine. The energy of the yellow is so, I’m the queen. 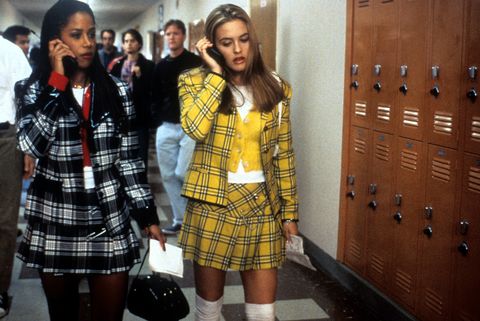 I made Dionne’s outfit. It had to be perfectly matched to go with Cher. I added the vinyl lapels to match the hat that we got from a designer in New York. It all came together with the Dr. Seuss hat in the car and then the backpack. We really wanted to open the movie with [a look that says], “You are in high school.” That was really important to Amy, to make sure we are grounded and stay youthful. I never used high heels, we always used Mary Janes. Everything was age-appropriate. There was never anything too sexy. We really tried to bring girliness to this film, to inspire girls [away] from grunge. What’s the story behind Cher’s red Alaïa dress and feather jacket?I was looking for something very cool for that, because it was such an important dress in the film. I wanted something very high-end designer and I didn’t have a lot of money. Somebody had a connection with Alaïa and I was able to see if I could borrow something. They were game. It was Christmastime [in the film], so it had to be red. We had maybe 20 dresses to fit Alicia. In the fitting, when she put that one on, it was perfect. The neckline was beautiful—just low enough—and the straps were so beautifully far apart, it just glided off her body. It was just the right length. Then I designed a jacket to go over it because it had to be a little more fun for Christmas. We were able to wing it. 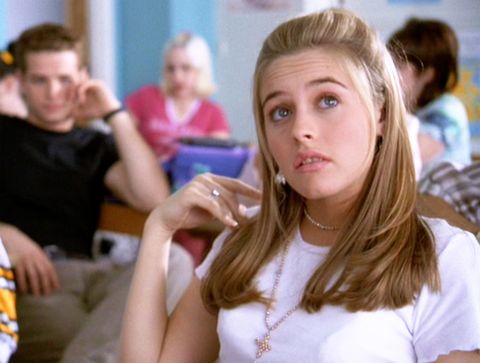 Cher saying the line “This is an Alaïa!” introduced this clever language of fashion that we hadn’t really seen before. Was that line in the script?The line was in the script but it wasn’t Alaïa. That was the intention of Amy, who wrote the script, but the designer came after we found the dress. Alaïa was the lucky guy that got to be used in the film and introduced to the world. Nobody really knew who Alaïa was before.
This content is imported from YouTube. You may be able to find the same content in another format, or you may be able to find more information, at their web site.

There have been rumblings about a Clueless remake. Thoughts?I don’t know if it can ever be what it was. They can make a remake, but the innocence of the time is lost because it was pre-social media. It was a capsule of time where girls could just be girls. They were less exposed to things. So, I don’t know. There [are] filmmakers who can make their mark with it, but it would never have the charm, the sensibility, this kind of innocence that the movie had.