Usually, when an actor approaches playing a notorious real person, their biggest challenge is how to avoid impersonating that person, or depicting the public’s perception. Amanda Peet, who plays the eponymous Betty Broderick in Dirty John: The Betty Broderick Story, had the opposite challenge. Though Broderick is widely known for murdering her ex-husband and his new wife in 1989, she remains a question mark outside of the divorce battle that led to her crime. This gave series creator Alexandra Cunningham a lot of leeway in crafting a complex and often sympathetic anti-heroine.“We don’t have a lot of footage of her from before the trial,” Peet points out. “Alexandra was really interested in this psychological portrait: How does someone who had socioeconomic status and a so-called happy suburban marriage and social standing become a raging murderer?”Below, Peet discusses her conflicted feelings about the woman she plays, the show’s depiction of gaslighting and self-delusion within a marriage, and why she savored playing Broderick’s darkest moments.I was startled by how sympathetic I became to Betty, even though it’s clear she’s an unrepentant murderer. The way she’s treated by Dan and the legal system is infuriating. How much did you find yourself seeing her point of view?My one and only job through this process was to relinquish all judgment. It’s difficult because I don’t excuse the fact that she murdered an innocent woman and the father of her children. There’s no justification for that. But it was my job to let go of all judgment and try to feel what it would be like in her shoes. Alexandra was telling a complex story, and the fact that she wasn’t interested in vilifying Dan Broderick or showing Betty to be the sole victim really compelled me to do [the show]. She’s a fascinating person, and I think most actors are interested in mental illness. I know I am.
Was there a moment the character clicked for you?It’s actually the scene from the pilot when Betty refuses to go up to the conference room for the arbitration. She gets all dressed up and goes but decides to boycott the arbitration. When her lawyer comes back, she asks, “How did he look?” When I read that, it clicked for me: her incredible infatuation with Dan Broderick, and how she could not see past him or beyond him. He was the sun and moon for her. I had never thought of true crimes as incorporating these intimate domestic scenes about very human emotions between family members. When I read that, it made me think, Alexandra has clearly stayed up many nights being like, “How did this happen? I have to find out. I have to get to the bottom of it.” Episode 2 focuses on Betty and Dan’s early courtship, and shows Betty feeling coerced into having more children when she’s clearly reluctant. It’s a complex dynamic we don’t see on TV often.She grew up in the social mores of the ’50s, where women were told that if they didn’t experience fulfillment from being a wife and mother, then something was wrong with them. [This] is really what Alexandra is interested in [with] the Dirty John anthology—women who have this illusion of fulfillment from their relationships. I think a lot of women feel that a man wanting to have a baby with you is evidence of your attractiveness and their commitment to you. And I think [Betty and Dan] both used their children in various ways, but [especially] in the beginning, to feel secure and fulfilled and busy.

Some of the hardest scenes to watch are between Betty and her children. In some moments she seems like a good mother, but other times she’s incredibly abusive. What was it like to play them?That was really important to me, to see Betty being abusive and sadistic. It made me feel safe, even though those scenes were very, very difficult to play. It made me feel more able to let go in the scene when she was being a good mother—she was kind and such a mama bear. [I felt] more connected to those scenes and more free to play those scenes because I knew we were also showing the other side of Betty, where she can be cruel and sociopathic, even before the murders.Reading a lot of the coverage from the divorce case, there’s an implication that Betty is all about the money. Obviously that’s a big part of what she wanted, but at least in the show, what she really wants is credit for the role she played in Dan’s success, right?She wanted acknowledgement. She wanted the recognition that his success, and his financial success in particular, was contingent on her contribution. That was, I think, a fairly new concept at that time. She forsook her own [dreams], she didn’t pursue a professional career, and a lot of women who got divorced in the late ’80s who came up in the ’50s were in a similar situation: at age 45 or 50, they were suddenly expected to reenter the workforce and figure out a way to have an income. 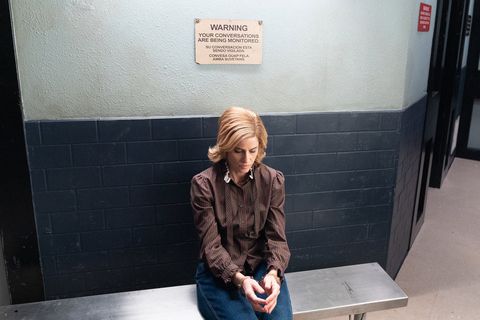 The scene in court where Betty is representing herself, and finally gets to cross-examine Dan, is such a tour de force.It was so crazy! Our page count was so insane. It was fun to be in the driver’s seat and try to find that innocence, because she really has this naive idea that the arc of history bends toward justice. It’s very poignant that she felt she could do this and justice would be served, and she couldn’t see that this good old boys club was a very real obstacle. There’s such a clear sense of how smart she was and how wasted her education and intelligence were. Women were taught to sublimate all their ambitions into being a wife and mother. It was a very powerful moment in the script when [Dan’s] lawyer says, “Look what a formidable case she made just now,” when he actually complimented her. It’s so sad.There’s a really telling moment at the end of episode 4 when Dan finally admits to Betty that she was right about him having an affair all along. It’s this happy moment of ecstatic relief for her. What’s happening in that moment?It’s this idea of gaslighting where you smell smoke and everyone around you is like, “There’s no fire. You’re crazy. You’re seeing and hearing things that aren’t there.” If you’re isolated enough, you might start to believe it’s true. A lot of it had to do with her inability to find any outlet outside the marriage. With that episode, Alexandra really captured what it feels like when someone tells you you’re paranoid again and again over time. You start to believe it.