Spoilers for Bird Box ahead. Dust off those blindfolds and settle in for a possible Bird Box sequel. In a new interview with Inverse, Josh Malerman, who wrote the 2014 book the Netflix hit is based on, said development on a sequel to the 2018 movie is underway. The project would be based on Malerman’s upcoming follow-up novel, Malorie, which hits shelves on July 21. Here’s what we know about the sequel—and the new book its based on.
This content is imported from {embed-name}. You may be able to find the same content in another format, or you may be able to find more information, at their web site.

A movie based on Malorie is in the works.

“I can’t say much, but I can say that it is in development,” Malerman told Inverse about a sequel to the horror film. “Sometimes it’s weird, all this secrecy, but I’m game.” Originally released in December 2018, Bird Box reached cult status after it became the most-watched Netflix film ever during its first week on the service. Bullock starred as Malorie, a mother of two children who must navigate a post-apocalyptic world filled with mysterious creatures that show people their worst fears. If faced with the monsters, many are driven insane and commit suicide, so Malorie and the other humans who still populate the earth wear blindfolds to avoid seeing them. (A world where people must wear protective gear outside their homes to avoid doom—what a concept.) At the end of the film, Malorie and her children find a safe haven at a school for the blind. But not until after a terror-filled trek to get there. Malorie is centered on Sandra Bullock’s character in the future.

Although the sequel book has yet to be released, we do know a few things about its contents. Malorie reportedly takes place 12 years after the original story and further explores the character’s life and her interactions with the creature-infested world. “In the time between Bird Box coming out and the time since I’ve been writing Malorie, I’ve been asked a ton of times: People want to know what happened with Boy and Girl,” Malerman told Esquire, referring to Malorie’s adopted, unnamed children. “But as much as I care about Boy and Girl, this isn’t their story. The Bird Box world is Malorie’s story, and I wanted to know more about her. I wanted to get to know her even better.” Malerman hasn’t divulged whether the book will reveal the origins of the creatures, but he teased a new chapter of Malorie’s grief to Entertainment Weekly. “Malorie receives a list of survivors and on that list are names that she recognizes,” he told the outlet. “So begins a second enormous journey of Malorie’s life.” The Hollywood Reporter published a suspense-filled excerpt from the book last month, which you can read here. There is no release date or confirmation that Bullock would return.The sequel has not officially been confirmed by Netflix, so there’s no release date. There’s also no word on whether Bullock or any of the film’s other cast members, including Trevante Rhodes, John Malkovich, and Machine Gun Kelly, would return. Rhodes’ character would only be seen in flashbacks, as his character Tom sacrifices himself for Malorie and her family in the first film. Meanwhile, Bullock has only starred in two sequels over the course of her career, 1997’s Speed 2: Cruise Control and 2005’s Miss Congeniality 2: Armed & Fabulous. 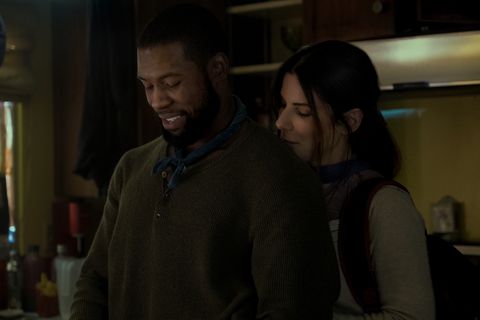 “We only just finished it!” the film’s director Susanne Bier told People last year. “It’s funny, I’m kind of reading people asking for a sequel and I’m like, ‘Hey, hey, hey, we really just finished!’ So let’s just enjoy it for now.” Is there a possibility for a trilogy?While talks of a sequel continue, Malerman hasn’t ruled out the possibility of a trilogy-making third book. “I don’t have any plans to do that right now, but I find myself really, really turned on and electrified whenever I do write in that world,” he told EW.Watch Bird Box

Aquarius Daily Horoscope – Free Aquarius Horoscope for Today From the...